Has Priyanka Chopra had Plastic Surgery?

Priyanka Chopra is an all-around celebrity who has brought the world into a dead-silent through her outstanding acting, modeling, and singing. This list of success would however be incompletes without the mention of her beauty. It is for her breathtaking beauty that she managed to win titles such as the 2000’s Miss World as well as gracing the covers of various magazines as one of the beautiful women in the world. However, as her career soared higher, so did the doubts of the naturalness of her beauty grow from whispers into the now widely spread rumors.

Although the actress has constantly been in the denial, a section of her followers believe that she has enhanced her beauty through plastic surgery for she doesn’t look natural at all. This allegation has, in turn, triggered questions like what plastics surgeries have had her, and why would she need the treatment.

What Plastic Surgeries has had Priyanka Chopra?

Although the “Andaaz”, the actress has always denied having had plastic surgery, her followers seem to believe more in what they see than what they hear. They seem to have drawn a clear cutline between natural beauty and the artificial one. From observation and comparison of her earlier images versus her recent ones, the model seems to have gone under the surgeon’s knife enhancing her beauty. It is believed that she has had a nose job, lip fillers, boob job, and gum surgery at least

Out of all the plastic surgery speculations made against her, rhinoplasty is the only one she has confessed to doing. In her memoir, “Unfinished”, Chopra mentions a time she went for a nose job which turned out to be a botched one. In one section of the book, Chopra discusses that she discovered a polyp in her nasal cavity after experiencing what felt like a sinus infection. The actress scheduled a routine polypectomy soon after, but the procedure went awry when the surgeon accidentally shaved the bridge of her nose while trying to remove the tissue.

“My original nose was gone. My face looked completely different. I wasn’t me anymore. I felt devastated and hopeless. Every time I looked in the mirror, a stranger looked back at me, and I didn’t think my sense of self or my self-esteem would ever recover from the blow.” This confession alone made her an object of scrutiny and before she could even realize it, she had already lost two film roles and demoted from the lead actress to supporting actress in another film. The media on the other hand nicknamed her “Plastic Chopra”.

Out of dissatisfaction and public criticism from her first surgery, Chopra went through a series of nose jobs in a bid to correct her botched surgery. “My career, a career based so much on physical appearance, seemed to be over before it had even really started…Now when I look in the mirror, I am no longer surprised… I’ve made peace with this slightly different me.” Chopra writes in her memoir.

Before the botched nose job, Priyanka’s nose bridge was slimmer and more elongated with the nose tip being more prominent, almost touching the upper lip. The final rhinoplasty seems to have worked wonders for the model since the gap between the nose tip and the upper lip has dramatically reduced.

Has she had Gum Surgery?

Priyanka Chopra is the type of lady whose million-dollar smile gives men goosebumps. She has a perfect set of pearly whites. Amazingly, her followers seem to give a nod that the actress never had neither veneers nor braces. However, speculations have it that, most likely the “In My City” singer might have had a gum reduction surgery. This allegation is anchored on the observation that, nowadays her smile doesn’t expose a bigger portion of her gum as was the case initially.

Did Chopra have Lip Fillers?

Naturally, Priyanka Chopra has voluminous beautiful lips, more so her lower chops. While the actress’s lips appear to be normal to some of her followers, another section of followers believes that she must have some filler injections since nowadays her upper lip appears to be fuller than it was initially. The allegations linking the actress to lip fillers have sparked up a heated debate amongst her followers. Experts have also chipped in and argued that it seems like the model has had subtle lip fillers since that upper lip looks slightly fuller than it was initially. They say that the change is so subtle that it can hardly be sported by ordinary observers. It calls for an eye for details. 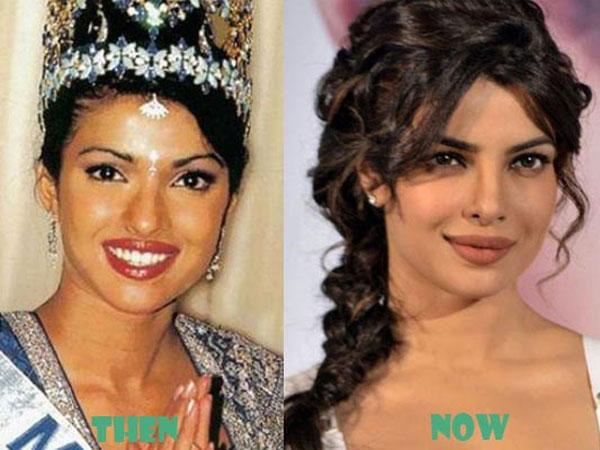 Did the Actress get a Boob job?

This is another challenging procedure to determine. While it remains clear that Priyanka’s busty has over the years increased in volume, it’s equally hard to determine whether the same cleavage is 100% natural or breast-augmentation dependent. Those who believe the actress never had a boob job base their argument on natural aging and weight gain as the reason for the bigger breasts. On the other hand, it is believed that the actress has had a boob job since the boobs not only seem to be fuller but they are also rounder. Since nature cannot reshape breasts making them rounder, the noticeable change has been accredited to breast augmentation.

Even though Priyanka Chopra has indirectly confessed having had a nose job, we are still sailing on the ocean of darkness on whether or not she has had the above said cosmetic treatments. The only option left in finding out whether or not the model has had other plastic surgeries is to open wide our eyes. So, after paying close attention to Priyanka Chopra, what remarks can you make? Has she or hasn’t she had plastic surgery? Share your thoughts.